Well, I’d first off like to apologize for my absence these past few days. Following my busy weekend, I was working nights and zombie-ing my way through life. It didn’t even occur to me that today- today being Thursday- was my final day of the Whole30.

I decided to pull out the timeline to see what I should’ve be experiencing during the home stretch.  What was interesting is day twenty eight’s description: 28 days is as good as 30 right? Meaning, aside from days ten to fourteen, people are most likely to cheat on this day. This was of particular interest to me as I had a similar thought on day twenty eight. As already stated, I was a zombie, not wanting to make my own salad dressing and I experienced a fleeting thought of “Okay, I’ll just use balsamic vinaigrette. Who cares?”.  After conquering all of the month’s temptations- alcohol, popcorn, treats at the nursing station- I almost cheated on balsamic dressing with two days left. Are you kidding me?

Precisely as the timeline describes, I had an instance where I thought that two days wouldn’t make a difference. Realistically I don’t believe that consuming the sulfites in my balsamic dressing would’ve been the end of the world. While a scant amount wouldn’t have had a significant impact on my body, it would have been detrimental to the mental aspect of these thirty days. So…..I did not let myself consume the balsamic dressing. I’ve done twenty eight days, I can do thirty.

Days twenty nine and thirty proved to be more challenging than expected. While I’m not experiencing significant cravings, I did not meal prep and suffered as a result. Yesterday I ate brunch at 12pm, then didn’t eat anything until 5pm. In between, I went to the gym for an hour and a half then the grocery store. By the time I made food, I was feeling light headed and exhausted. Having missed both breakfast and additional snacks both pre and post workout, I was starving come 11pm. Rather than allowing myself to just crack into my bowl of cheerios, I cut up some vegetables and nuts for a Whole30 approved snack.

Sidenote: zombie-ing is most certainly a made up word, however it most accurately depicts my motions of the past few days

Having consumed leftover breakfast casserole for the past four days, I was quite determined to try something new for day thirty. Remember that Apple Pie Omelette that I made on a couple of occasions? Well this recipe for a Sweet and Savory Blueberry Omelette seemed along the similar lines of that and I deemed it worthy of attempting for my grand finale.

Unfortunately, I did not read the ingredient list prior to starting and realized that I was missing coconut aminos. If you are unaware, coconut aminos is a sauce- resembling soya sauce or tamari – that is a derivative from coconut sap. Many Whole30 participants depend on this sauce as it can be used in dressings, marinades and sauces. I personally did not want to spend the money on it as I was trying to complete this Whole30 cost effectively.

The absence of coconut aminos in my pantry certainly affected the savory aspect of this recipe. To make adjustments, I ended up combining coconut milk and cinnamon with the egg mixture. I then sliced mangos and used the few blueberries that I had left to sprinkle on top, along with shredded coconut. While this did not have the savory flavour I wanted, the dish was tasteful and unique. 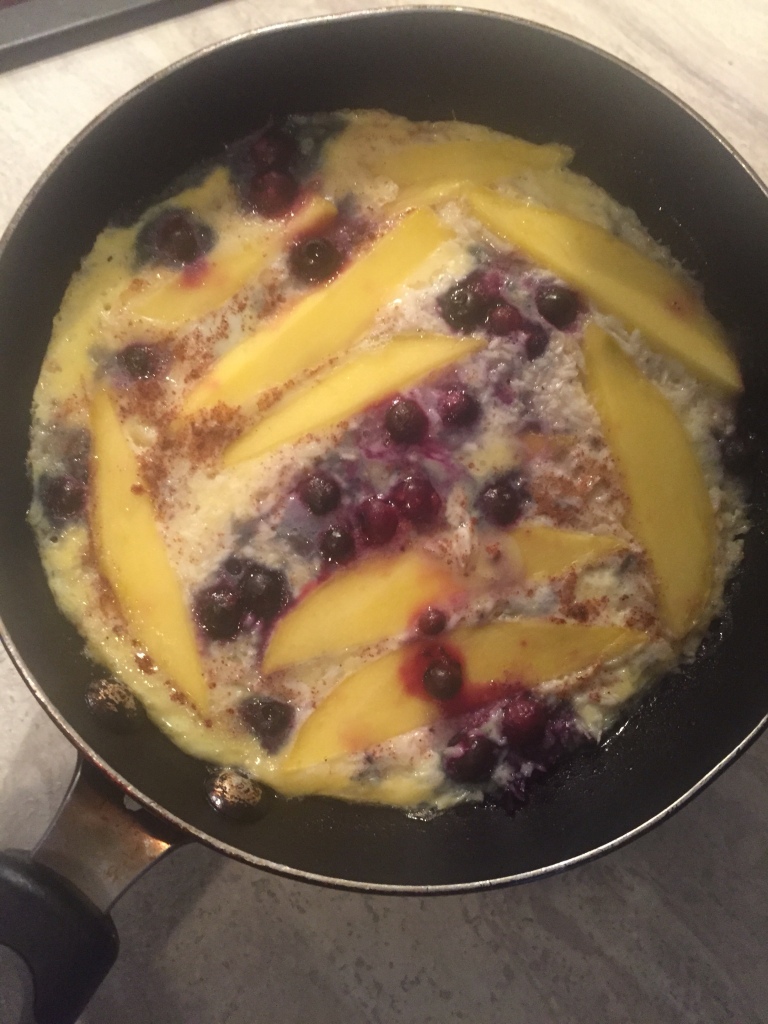 I took the liberty of taking a photo prior to removing the omelette from the pan, as you all know I do not excel in that area of cooking. When telling Maris about my large consumption of eggs, she retaliated stating that “eggs are bad for you”. As I have learned in many instances during this month, certain foods hold bad reputations with little background information. So are you surprised that I researched the advantages and disadvantages of eggs?

As you can see, eggs are nutrient dense and provide many benefits to your overall health. While yes, they are high in cholesterol, studies have no linked eggs to raising one’s overall cholesterol levels.

With all of my research, this disadvantage was the only plausible one found. Every other listed disadvantage related back to cholesterol, stating that “While there is a large amount of cholesterol in eggs, eggs do not raise one’s blood cholesterol level”. This in turn does not contribute to heart disease or arteriosclerosis and is not a worthy disadvantage.

Now that we’ve established that eggs are in fact beneficial for your health, I would like to tell you about my final Whole30 supper that did not consist of eggs. Something I have recently taken a liking to is mushrooms. Like Brussels sprouts, they also held a poor reputation in my childhood. However I am diligent in trying new foods and became rather fond of these earthy fungi. Having seen a recipe on Pinterest for Vegan Mushroom Alfredo, I could not resist, as this recipe was also Whole30 complaint. 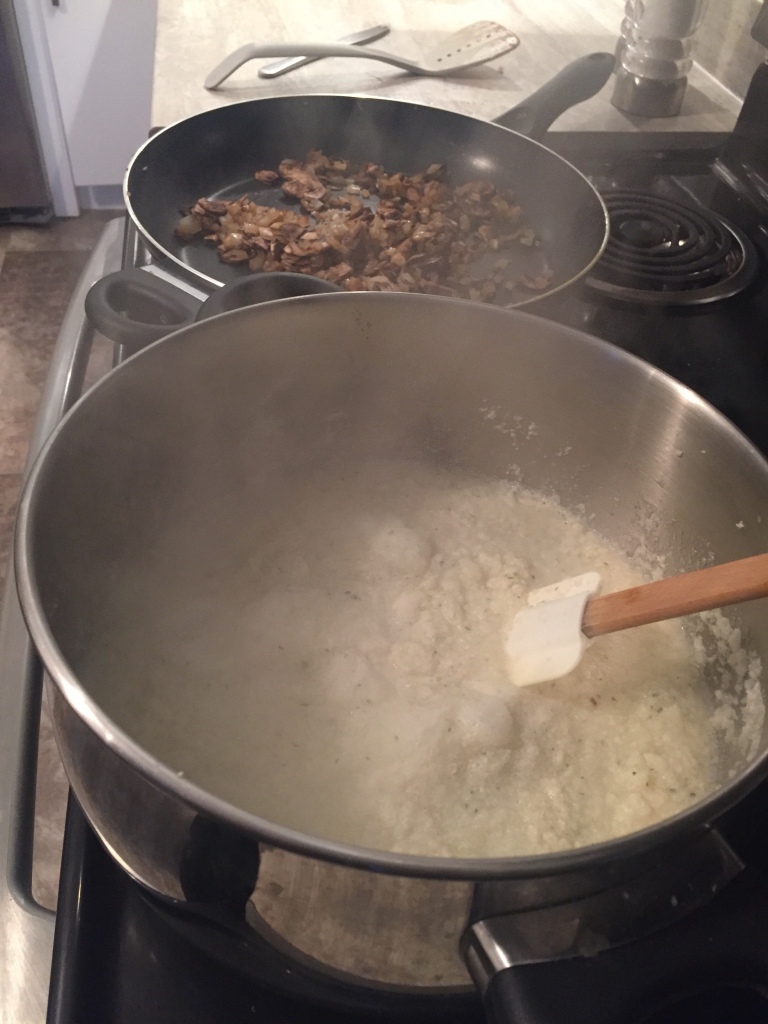 With price matching cauliflower for $2.88 (I really am mastering the price matching life), I was so excited to make my sauce. Consisting cauliflower, mushrooms, onions and  almond milk, this recipe was not the “bang” I was hoping to attain for my Whole30 grand finale. Cauliflower can be bland and that is the best word to describe my sauce. If I was to attempt this again, I would try using more than one container of mushrooms. I would also not puree the mushrooms with my cauliflower, as perhaps that is where the flavour was lost.

I ended up topping this sauce on spaghetti squash, with sliced grape tomatoes (also price matched for $1.88) and a baked chicken breast.